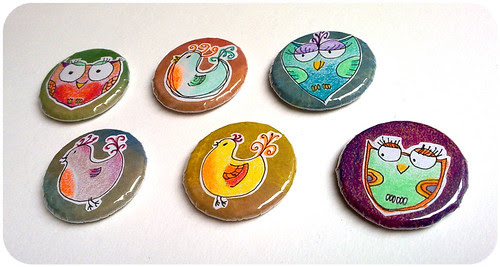 I noticed Threadless's contest today and decided to enter.
I'd be eternally grateful if you could help me out with nice scoring - if they approve the design of course :)

Yesterday was one of those wet autumn days. I didn't really know it was wet until we came to our usual hiking place where I noticed wet ground and foliage. It looked like we missed the rain for a few minutes (which was good of course).

I looooove the scenery in the woods when it's all wet and foggy. Colors are saturated and everything looks so fairytale like. 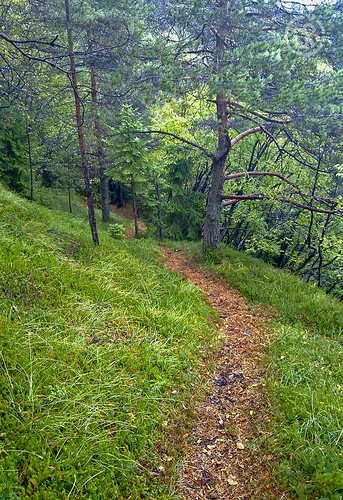 And there were salamanders all over. Seriously, we had to pay a lot of attention when walking just so we wouldn't step on one. I find them really adorable: 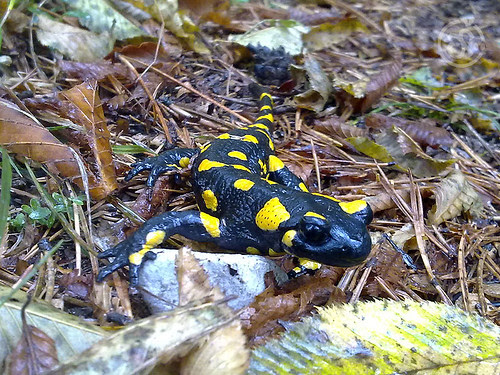 Earlier this year I decided to try my luck at a (as I was told) very well known biennial ceramics competition that is held in Carouge, Switzerland. They seem to have very distinct themes at this competition. This year it was simply "The Box" - two years ago they had "Tea Pot". There were only a few rules to obey like size, ceramics only and 2 piece set - box with it's lid. The rest was up to us.

So after my first failure (I wanted to make some sort of "stack-able" box but wasn't really careful with it or accurate enough, and now that I think about it the thing would make more than two pieces which would disqualify it immediately anyway) I came up with this idea: 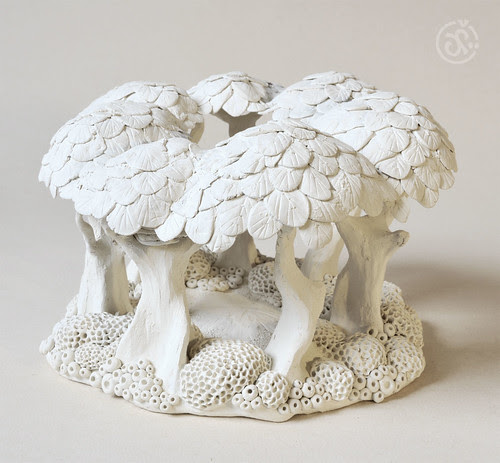 This thing is in the realm of boxes? I hear you ask. Well yeah, look at the proof: 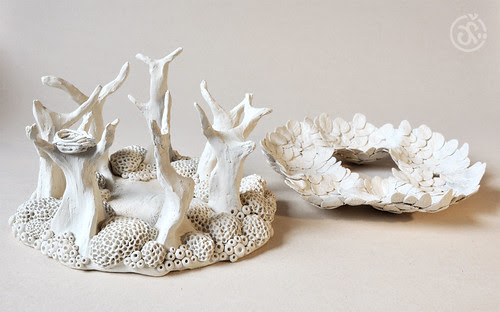 So I sent them these two photos, as I was supposed to, and I waited and waited (they had to assemble their jury and everything and it took months) and I finally got an answer. They accepted my submission to be shown at the exhibition! Boy was I happy. Truly really happy. Because getting in is huge, really huge (especially if you know they received 795 submissions).

And yeah, I'm still happy about it :D


p.s.
The exhibition will be open until 6th of November so if you're in the area, drop in and let me know how it looks like :)
Avtor nini ob 23:04 6 comments:

It's killing me not knowing what happened to you. 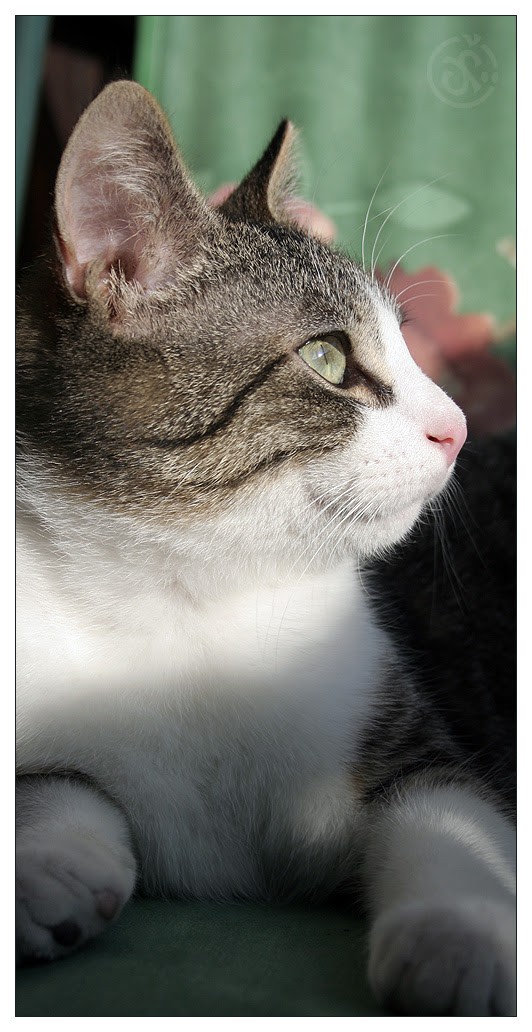 New girl on the block... 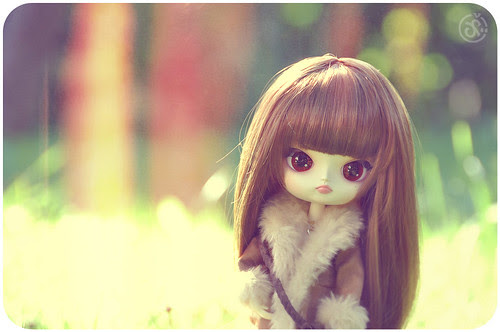 It's been really long since I last visited our capital so it was kind of special for me. I can't believe how things changed from my last visit.

If you follow the path on the left you will end up in front of the town hall and if you choose the right one, it'll take up to our little castle :)

I've been away twice since my last post. I visited my friend who stayed in Rome so I had a week to wonder around the streets and do absolutely nothing. It was really nice being able to be there like that, no sightseeing pressures (as I've been there before) no time table to follow, nothing. Just window shopping, discovering new alleys and streets and chatting away afternoons.

I even managed to make her a present there - bought some textile markers and drew a dragonfly on a long sleeved shirt. She loved it. 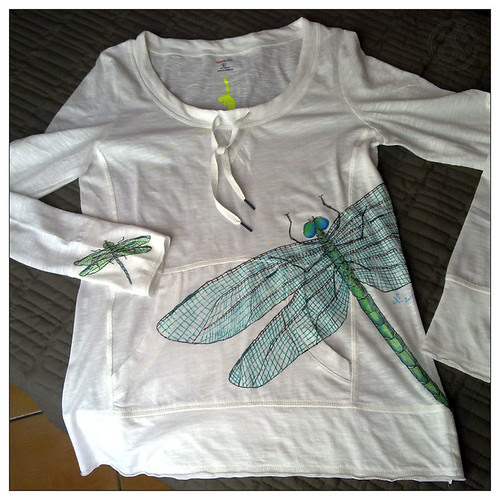 My second escape was our yearly one week visit to Rhodes Island in Greece. As always, the weather was wonderful, sea in just the perfect temperature and time flew by too quickly. I hope we'll go for another week in September. 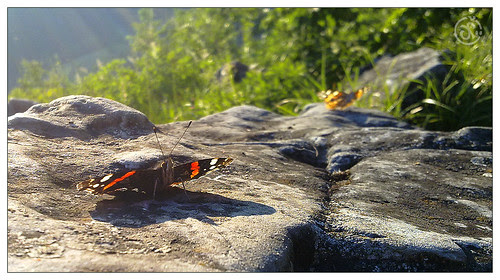 If you were wondering how I made my Shabby Chic Shelf.

Ha! I finally made something I wanted to make for I don't even know how long. I love the idea of recycling. The idea about making something useful out of things that would normally end up in the landfill.

The idea for making a shelf out of old newspapers and cardboard has been with me for a really long time. After seeing a Trash to Treasure Contest announced over at dA I knew I just have to make it and enter. So I did. Here is how it looks like: 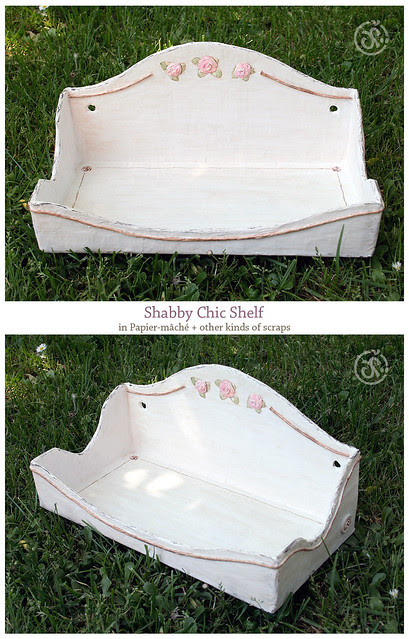 I don't know why but I went for this vintage feel when coloring it up. I could do so many different "personalities" but somehow this type seemed appropriate. And I do love it.

I needed to make a gift for a very gifted printing artist I met at my printing class. Based on the drawings he makes I made him Nigela: 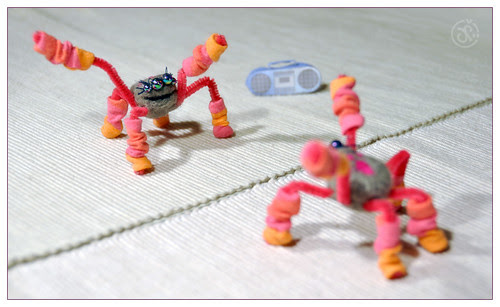 Nigela loves aerobics and since she lives in a dancing school she can dance every night when the classes end. During day time, she loves to visit the school's garden:

I'm pretty happy with how she came out. Her legs are pink because there were no black "pipe cleaners" available anywhere and I think her leg warmers should be in a different colour but oh well, this will have to do :)

My bf statement when I showed her to him was just the best: "Omg, this is so ugly and disgusting!" :D
Avtor nini ob 22:06 2 comments:

Creatures from the Wheel

I promised to upload some more things I made in my pottery class. First one is a mini baking dish. The practice side of this was making that cone in the middle. The "usual" size for such dishes is about 40-50 cm in diameter and they are used to make potica. That's why I'm calling mine a mini one (only 15 cm across :) ) It's not coated with clear glaze yet. 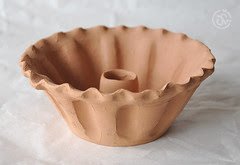 Next thing is really A Thing. It was another practice with double wall dish but at one point it started to collapse. Since I liked it I went on with it for as long as I could. I think it would make a great ashtray but since I don't smoke I'll have to figure out what to do with it.

The last one is another flop which I think I managed to pull off brilliantly :D

I'd like to color them all with glazes so that they will hold water and could actually be useful for something.
Avtor nini ob 13:02 4 comments:

It's a smaller bowl I made with pinching technique. That's why it sits so well in my hand and is in general very pleasant to hold. Makes you wanna play with it all the time.

I tried my new glazes on it and I really like how they came out. I need to make more of these but time issue is my major problem right now. But that's old news right? ;)

I can't believe how fast this time flew by. It's been over a month since my last post! I really think there is more to time than we think.

I attended and finished a pottery class. It was fun and inspiring and also pretty hard working meaning one needs quite the strength in the hands. I know now that I would need a lot more time with the wheel to learn how to center the clay properly and to get the hang of it but the time I had to play with the clay was truly awsome.

The last batch of my pieces needs to be fired and I'll post one or two weird things that I made. The rest is really only good for potting the plants in :) Which will happen soon enough now that the spring is around the corner. 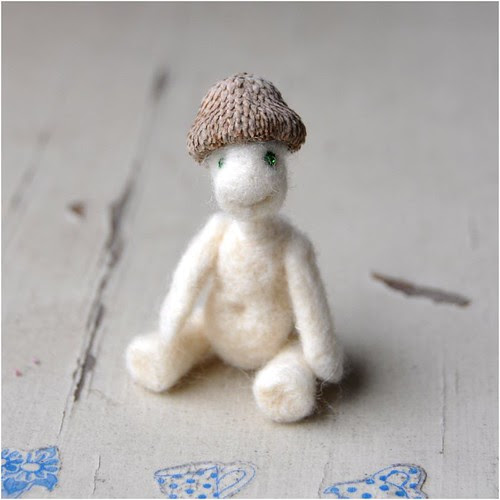 This, on the other hand, was a present I made for the person who brought me all the acorn caps I currently hold in my possession :D  It was an absolute fun to make such a cute chubby little fella.

I wanted to make a collagraph for my mom's birthday ever since I lay my eyes on this technique. So I got the idea, sat down and prepared this to be printed in my printing class: 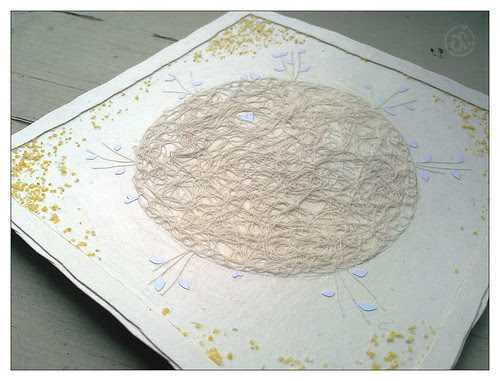 After much trouble with wiping off the excess paint from this collage to put into the print press I finally got out my much anticipated Collagraph print. And what a disappointment it was (to me at least). Certainly not fit to be given away as a present. But. Luckily for me, I loooooved the painted version of collage so I decided she is going to get that :) 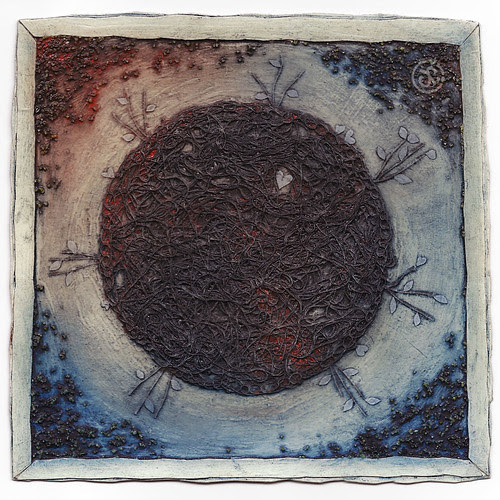 I'm getting really drawn to these. 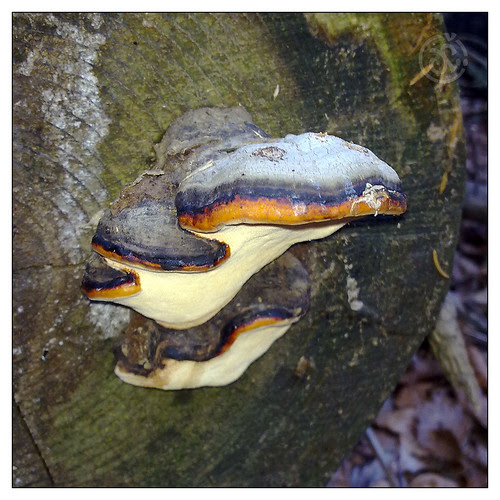 I love the colors on this one - cream, orange and light blue - almost as one of those old fishing boats.
Avtor nini ob 16:59 No comments:

Here. I wanted to share this tiny little fungi I noticed on our Sunday's hike. I've never seen them before and I found them totally adorable. 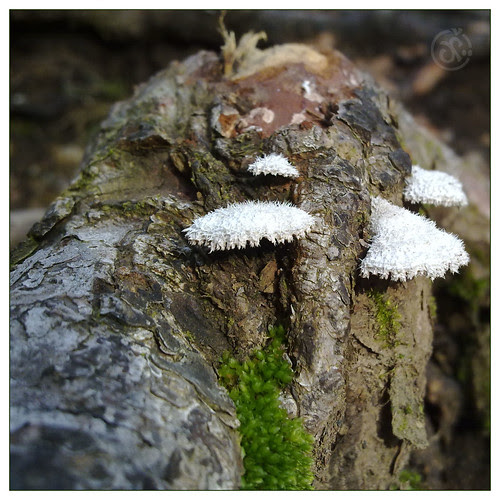 I also brought a piece of bark back home because it had such a lovely texture on the inside. I have to figure out how to use it or incorporate it into something. Yes. Things are waiting to be done :)

I hope you're all fine and busy with pleasurable things and I wish you one great 2011! There, I finally said it! :D
Avtor nini ob 17:56 2 comments:

Wanna get in touch? 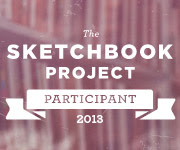